What makes for an effective principal? 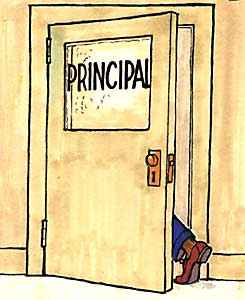 I have worked with many principals during my career – those at the three schools when I taught, those that helped to implement the Modern Red SchoolHouse initiative when I was at that non-profit, those with which I have assisted as a consultant – and I have seen a wide variety of effectiveness. An ineffective leader shows him- or herself pretty quickly, no different from leaders in other organizational settings – for example, the building leader whose office was piled high with papers and notebooks and magazines, a hoarder’s warren, an analog for her cluttered mind. There was the principal whose door was shut all the time; I needed to battle through two administrative assistants to win the chance to knock on this leader’s door, and then, while in her office, she’d talk on the phone for 10 minutes, before acknowledging me. I was a peon, it seemed. Wonder how she made kids or parents feel.

The darn good principals take more time to show themselves – the ones with which I have worked do not showboat, preferring a quiet path to a loud one – but after a few hours with them, you see what they’re doing.

For example, Perry Hayes at Elgin’s Ellis Middle School has created what a colleague called a “leader-ful” school, asking his faculty to step up and take on various roles as part of that building’s school improvement agenda; principals like Perry distribute leadership out into the building rather than horde it. “I identify my strong people,” Perry wrote me, “or have people identify them for me – nominate them, I guess.” With this leadership team, Perry then talks a lot with his staff about goals for the school and involves everyone in developing and monitoring a plan for success. “And we’re sure to celebrate our successes,” he finished, “for nothing promotes positive team-building as much as success.”

That building, when I worked with it, was a well-oiled machine, with many good things happening at it. I have a feeling it still is.

What other characteristics have I seen that make for an effective leader? A few ideas.

1. It goes without saying: Effective school leaders focus on student achievement. Now they don’t do it like automatons; particularly during these last few years, I run into building leaders that are up to their eyeballs in data and numbers and the latest set of test scores, but all of that info seems to blind them to the day-to-day of the school, of the classroom. They seem to be making decisions solely from spreadsheets and do not get out much.

2. Effective principals like kids – and might be a little kid-like. I know: It should go without saying. But the door closers – those that hide in their offices – they don’t seem to derive much joy from that daily interaction with their charges. I like principals that are on the school’s front stoop, shaking hands with kids and saying, “Good morning.” Principals that kneel in the hallways so that they are eye-to-eye with a kindergartner. Principals that sit in a high school English class for the full period, to be part of that day’s discussion on Ethan Frome. Jared Cleveland, the superintendent of Arkansas’s Lavaca Public Schools and a former building leader, looks “for principals that care enough to make a home visit to a student’s house or ride the bus with a child that’s afraid to go alone. The principal must be out in the building, must be child-centered.” And Martha Cutts, the principal at DC’s Washington Latin Public Charter School, told me: “Students deserve a principal who knows their names, is fair and approachable.”

3. Martha continued: “Parents deserve a principal who genuinely sees them as partners in the education of the children, someone who is honest and open to hearing what parents have to say and who will communicate with them.” And so really effective principals communicate well with all constituent groups – not just parents but school board members, other elected officials, teachers and staff, school district personnel, people from the neighborhood, even their peers at other schools. Dealing with these various groups, good school leaders balance their political skill with a deep and honest empathy for constituents and their concerns. They’re not fake, and they do a terrific job following up with these people, tenacious in getting answers.

4. Effective principals hire well. They build orchestras in their schools, hiring oboists and tympanists and cellists who work hard to learn and play the same song – and play it skillfully, passionately, beautifully. Robb Rauh, the principal of Milwaukee College Prep, a pre-K-8 public charter school, wrote that the “most important qualities for a principal are doing deficit-based hiring on your administrative team,” as Robb hires people who are really strong in areas in which he is weak. And his teaching staff? “Mission-based hiring,” he told me.

Robb’s hiring reminds me of effective teaching: An effective teacher fully admits that she does not have all the answers and quickly gets her students in on that work, to get some answers; they’re not just recipients but full participants.

4. And lastly, at least for today’s entry: Effective principals are highly deliberate. Genie DePolo, a great friend from my Modern Red days and principal at NYC’s Manhattan Charter School, confirmed that for me when she and I talked this Monday. They’re not blown to and fro by the winds of the latest ed fad. If something’s not working at the school – a new language arts curriculum does not seem right, for example, or there’s the need for a better school-wide formative assessment tool – these building leaders gather all of the available information, engage their staff and their parents and other constituents (as appropriate) in conversations, and then develop and enact and monitor a plan to change what’s not working. I have been in too many schools where there’s some literal repository for the latest and greatest: a closet or classroom that has shelves filled with a barely used textbook series or boxes of unopened computer software. “We had money that we needed to spend by the year’s end,” I remember one principal telling me, “and someone told me that this software was really good.”

Think of those school principals that you count as highly effective: What characteristics did they show in your work with them? What more can you add to the above list?

One Response to What makes for an effective principal?